Social media can be conspicuously cruel and irrational. It also reveals a lot about human nature and our “identities”… 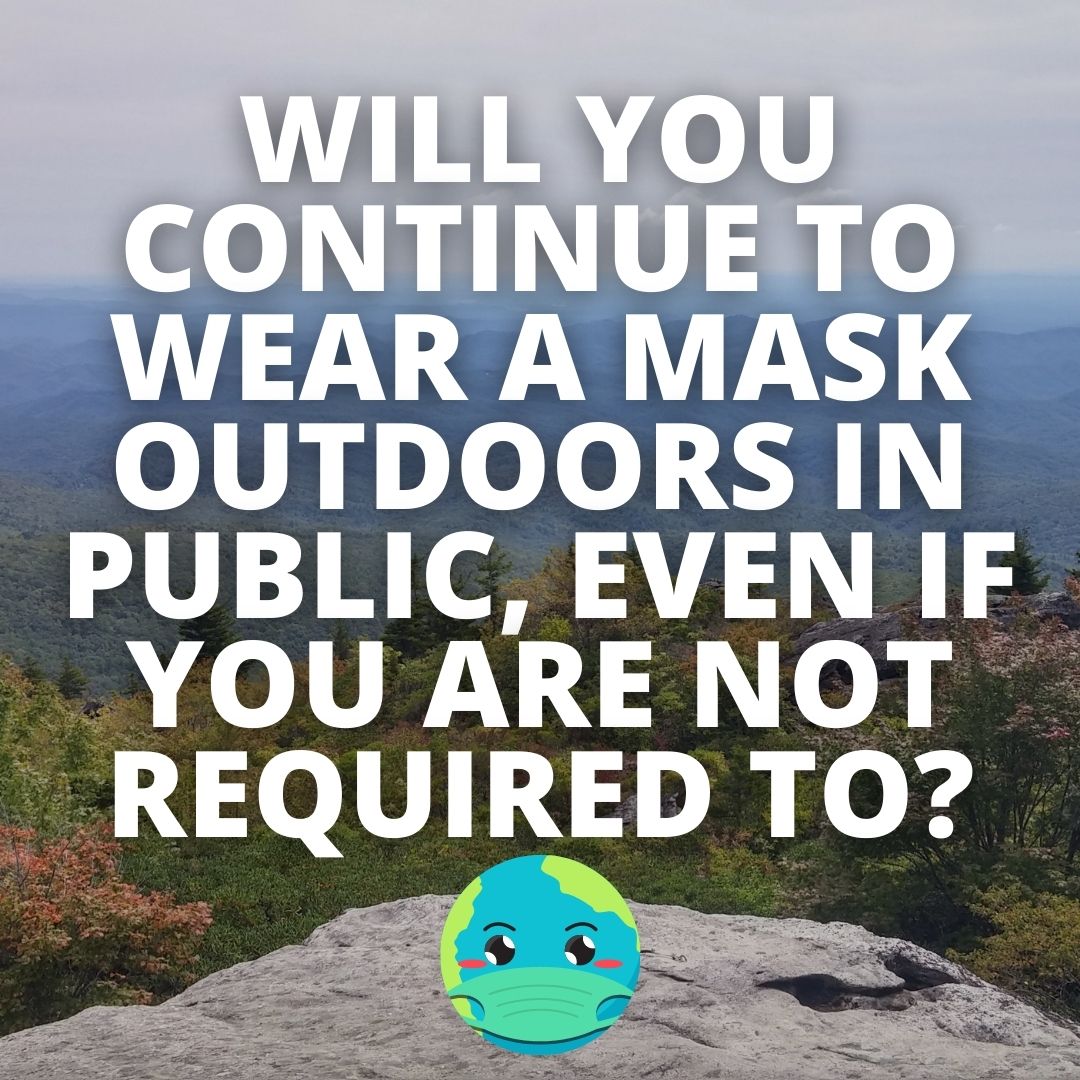 She is the CEO of TurnKey, “a U.S.-based strategy and execution firm for nonprofit fundraising campaigns.” TurnKey’s magnificent client list includes Susan G. Komen and ALS. (The ice-bucket challenge?) 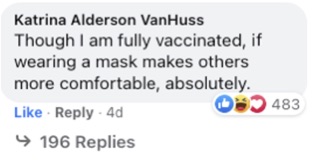 As Otis Fulton, a social psychologist at Turnkey (and Katrina’s husband), noted:

Within four days, Katrina’s seemingly innocuous reply had elicited a whopping 196 replies and 483 responses, including 134 “ha-has.” Eyeballing the replies, the negative comments outnumbered the positive, supportive ones by about three to one. Here are a handful of examples:

Otis then published his psychologically-well-informed review of what had happened and what it means to fundraising:

There’s a lesson to be learned here regarding how nonprofits go about raising money for their missions. If the “mission” Katrina described is “consideration of others,” what made so many respond this negatively? Why would they aggressively oppose a simple courtesy?

People came out of the woodwork to respond because of their identity. Specifically, Katrina’s comment triggered their identity as “anti-maskers.” Anti-masking is part of a larger political identity that increasingly defines a significant portion of our country. A 2020 NBC poll regarding mask-wearing in public revealed a more than 30-point split between Republicans and Democrats. A recent Kaiser poll found a similar gap. Anti-masking mirrors “vaccine hesitancy,” which is something that should concern us all.

As we’ve written in a previous blog, political identities spill over into many aspects of our society, and charitable giving is no exception.

Let’s examine the power of identity to influence behavior.
Everyone has many facets to their identity; I’m a husband, father, animal-rights supporter, liberal, University of Virginia Alumni, etc. Some aspects of one’s identity are more important than others at any given time, more “salient,” as psychologists say.

Our identities form the basis for how we divide up others into “in-groups” and “out-groups.” It’s pretty simple—you’re a member of my group or you’re not. Groups can be big and general, like men/women, young/old, White/Black. The characterization of small in-groups is limited only by the identities we carry, like “aging White former ACC basketball players,” a pretty small crowd I’m a member of.

After a few days, we decided we’d write about her post. So we turned it into a little social psychology study. At this point, Katrina responded to one of her “flamers,” emphasizing the “consideration of others” angle again: 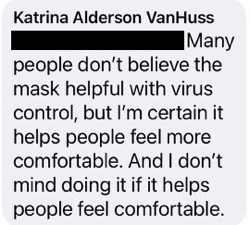 The response? People simply doubled down on their earlier comments.

One pervasive finding in psychology is that people favor those who are part of their in-group(s) and discriminate against those in their out-group(s). That’s why trying to engage someone with reasonable arguments counter to an attitude built on their identity is usually a big loser, as evidenced by this person:

The posts of the anti-maskers reflect an “us versus them” mentality.

Many expressed that their personal freedoms were being challenged.

We thought that changing the perspective of the anti-maskers with regards to their in-group might cause them to reconsider their position. For example, if they saw the far-ranging consequences of their “personal” decisions.

We decided a better approach than shaming and hectoring would be to broaden their perceived in-group: “I know you’re young, and COVID-19 probably won’t kill you or even make you very sick, but I just worry about my grandma.” Everybody has (or had) a grandma. “Have Grandma” = in-group.

So, Katrina started “in-grouping” (I’m using the term as a verb here) people on Facebook. Here’s how one conversation started: 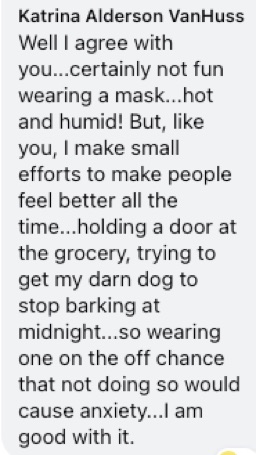 She used this approach on many who posted angry or insulting comments. She got zero responses from this commenter or any commenter when she responded in this way.

Why? It’s hard to treat someone in your in-group badly. While they didn’t come around to her way of thinking, they moved. And that’s what we are after—movement.

So, what’s the takeaway—beyond COVID? How do we use this to raise more money? Remember, no one really cared about Katrina’s “mission” of being considerate. They cared about whether she was part of their in-group.

We can use what we know about identity to move people in two ways.

First, “prime” people about the parts of their identity that are congruent with your cause. “Priming” is psychologists’ lingo for “reminding and activating.”

Prime early and often. It’s particularly important right before you make an ask: “As a healthcare professional, you know how important children’s…” or more generally, “As a caring, compassionate member of the XYZ Foundation community, you understand…”

Second, expand in-groups to include more supporters and prospects.

Instead, you might try, “As a mother, you understand the pain of not being able to provide for your children.” “Mothers” is a big in-group. When you start to think this way, the possibilities to include people become nearly endless.

That Facebook thread is still up and pulling in comments. Katrina’s next post is going to be the link to our Nonprofit PRO blog. We hope everyone will be cool learning they were subjects in our little experiment.

This is a lightly edited version of a blog post originally published in NonProfit PRO, under the title: “What Anti-Maskers Can Teach Nonprofits.”