At a time when more Americans are in need of assistance but fewer are in a financial position to be able to provide it, Gallup finds a new low in the percentage of Americans reporting they donated money to charity. Seventy-three percent of U.S. adults say they donated money to a charitable organization in the past year, surpassing the prior low from the Great Recession era. The percentage who say they have volunteered time to a charity is down from prior years, but not the lowest it has been. 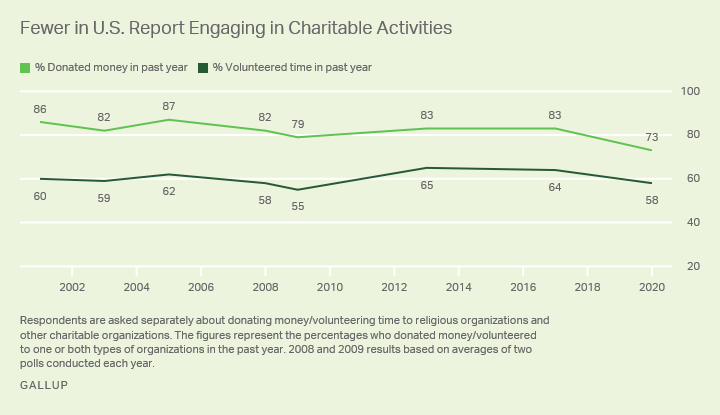 These results are based on an April 14-28 Gallup poll conducted amid the coronavirus pandemic. In addition to overcrowded U.S. hospitals, medical professionals in protective gear and ordinary citizens wearing face masks outdoors, another enduring image of the crisis will be long lines at food donation centers. More than 33 million Americans have filed for unemployment benefits as stay-at-home orders designed to slow the spread of the virus have brought much of the U.S. economy to a halt.

In prior years’ polling, Gallup usually found more than 80% of U.S. adults saying they donated money to a religious or other type of charity in the past year — except for 2009, during the worst economy since the Great Depression, when it dipped to 79%. While the full economic toll of the coronavirus situation has yet to be realized, it may surpass that of the Great Recession if not the Great Depression.

Although the donation and volunteering questions ask about activity over the past 12 months, it is possible many respondents may be answering only about their current or very recent activity. The sudden downturn in the economy and stay-at-home orders began in March, but those events followed a strong economy the prior 10 months, during which people would arguably have been in a better position to engage in charitable activity. There is also evidence from past surveys of a seasonal pattern in responses, with higher estimates of charitable activity when the question is asked in December than in other months of the year — again suggesting that some people may be answering about what they are presently doing rather than what they’ve done over the past year.

Also, the decline in charitable activity since 2017 may be related to changes in tax laws as well as the coronavirus. More Americans now than in 2017 claim the standard tax deduction, and would not get a direct tax benefit from donating to charity as they would have in the past.

In addition to donating their time and money, the poll finds 60% of Americans saying they have donated food and 13% saying they’ve given blood in the past year. This is the first time Gallup has asked people about making food donations. Gallup has asked Americans about giving blood six other times since 2001. The current reading is, by one percentage point, the lowest Gallup has measured in a single poll and is three points below the average of 16%.

Charitable Activity Down Most Among Lower-, Middle-Income Households

As would be expected, upper-income Americans have consistently been among the subgroups most likely to make charitable donations. While that continues to be the case, charitable giving is down among all income groups since the prior measurement in 2017 — but it has fallen much more among those in middle- and lower-income households than among those in upper-income households. As such, the gap in the percentages of upper- and lower-income Americans giving to charity has swelled from 19 points to 31 points.

About Three in 10 Have Assisted COVID-19 Relief Efforts

Coronavirus-related charitable activity is more common among higher-income adults as well as Americans with higher educational attainment. Forty-three percent of upper-income Americans and 49% of those with a postgraduate education say they have donated or volunteered to help those affected by the coronavirus pandemic.

More Plan to Increase Than Decrease Charitable Donations in Next Year

Last month, 30% of Americans reported some direct financial harm from the coronavirus pandemic. In a troubled economy, it may be difficult for Americans to devote resources to charitable organizations.

The majority of Americans, 66%, say they do not plan to change the amount they give to charity in the coming year. However, more say they plan to increase (25%) rather than decrease (7%) their charitable contributions.

The figures are very similar among Americans who have donated money in the past year — 27% plan to increase those donations, 66% plan to keep them about the same, and 7% plan to decrease them.

Americans with a postgraduate education are especially likely to say they plan to increase their charitable donations, while the results are similar among the other education groups.

The coronavirus pandemic is harming not only the physical and mental health of many Americans but also the finances of millions more. High levels of unemployment are putting pressure on the federal and state governments to help those in need, as well as on charitable organizations.

Gallup finds a new low reporting charitable donations at a time when the majority of Americans say they have pulled back on spending. Currently, most Americans do not plan to cut back on their donations, and roughly one in four plan to increase them. The duration and severity of the economic downturn will be a key factor in whether Americans are able to fulfill those intentions.

Learn more about how the Gallup Poll Social Series works.