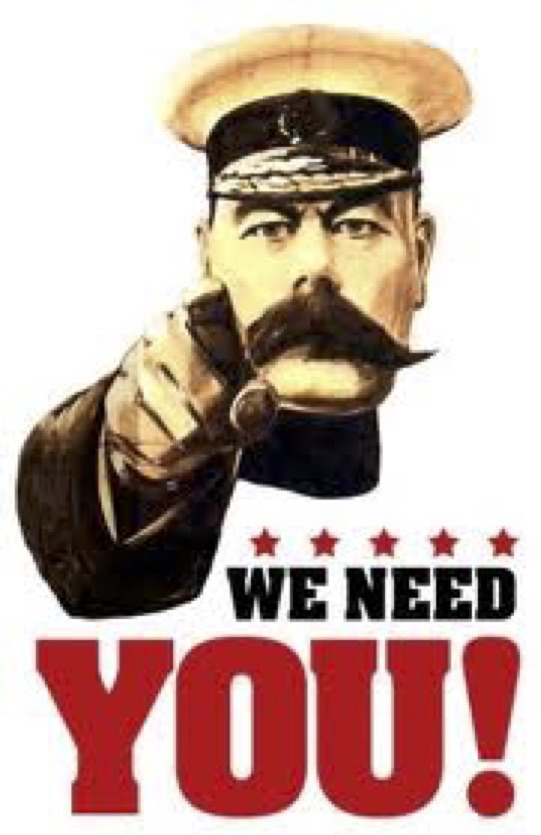 That is what a successful case for support looks like.

This poster recruited British troops for the First World War. It was conspicuously effective: six million mobilized; 700,000 died. Which gutted a nation and was the beginning of the end for the Empire: unintended consequences.

Three words and an image: nothing extraneous.

Three words and a commanding image, in front of the right mind/eyes … and six million join the cause.

So, what’s happening in this “simple” message?

“We” is a values statement

To the British public of 1914, 1st Earl Kitchener was the “hero of the Sudan.” He erased the shame of Gordon’s massacre; how dare they cut off the head of a British gentleman? Kitchener then destroyed the Boers in two brutal South African wars.

Even his mustache became famous.

If you saw yourself then as a responsible British male, living up to the ideals of your imperial nation, loyal to King, Queen and country, you responded … from duty, enthusiasm, fear or guilt? Six million individual reasons. To die in vast unsettling numbers

They sort your audience into two piles: (1) people who might share some value(s) with you; and (2) the rest.

You don’t raise money from the rest.

Move on. Forget about it.

“Local,” for instance, on the other hand, is a common value.

I WILL give to make my backyard a better place … for enlightened self-interest if for no more sublime reason.

We see justice as a value, too.

Why do people give? (Since giving away money, i.e., your resources, is an illogical act, Darwinians could argue.)

A lot of giving is simply a socially conditioned response: we give because we are asked.

(It’s axiomatic: if you don’t ask, you don’t get. Did your house party fail to generate new donors? Take an X-Ray: was your “ask” strong or shy? Was it clear and specific and urgent and determined? Did everyone on the room clearly know what you were asking for … including staff and board?)

People give because they are told, “We need you.”

They give because they’re told, “We can’t do this without you.”

Getting more complicated than that is for charities with massive budgets and big, introspective staffs: nonprofit causes “too big to fail.”

People give because it feels good (the brain spurts three positive chemicals with each gift).

And because they can easily afford what you’ve asked for (we give away our surplus).

And because we are, evolution dictates (and despite seemingly incessant conflict), a cooperative species.

The WE NEED YOU poster points directly at YOU, not at someone else. The exclamation point adds urgency and emphasis.

As an exercise, [you] might try to create a similar poster, using these same basic concepts: values, purpose, personalization.

What you dream up might never be ready for public use. But having the discussion will be useful.

The War That Will End War. H.G. Wells book title, 1914. The book was a celebrity Futurist’s prediction and promise. Quickly, as the rodent/human reality of trench warfare became known to Wells’ contemporaries, the “that will end war promise” became a joke. As 700,000 deaths mounted, it became a CYNICAL, UGLY joke. It crushed the world economy in 1929. Within a fingertip past 2 decades, WWII exploded subject of Tom Ahern’s latest memoir/fiction, My Father’s War Stories As Told By Toys, published 2019 by Pelekinesis Press