Foundations across the U.S. are helping journalists watchdog the powerful — but who’s watching the foundations?

RELATED ARTICLE
A definitive playbook: How to DIY a local nonprofit news outlet

The state of the journalism industry might be much more tattered right now if not for philanthropic dollars helping to sustain national and local news outlets like ProPublica, the Center for Investigative Reporting, the Voice of San Diego, Texas Tribune, and others. Nonprofit news organizations have made so much progress in the past decade that now there’s even an playbook for how to make your own. But where is this money coming from, who is it going to, and how are these dollars reshaping journalism? (A piece by Julie Reynolds pointed out that the Knight Foundation has, in the past, invested in Alden Global Capital, the parent company of the “strip-mining” Digital First Media.)

A study co-published by the Shorenstein Center and Northeastern University (and funded by a couple of foundations itself) zooms in on the role played by foundations in the journalism world. Researchers Matthew Nisbet, John Wihbey, Silje Kristiansen, and Aleszu Bajak analyzed more than 30,000 grants (totaling $1.8 billion) from more than 6,500 foundations between 2010 and 2015.

Their analysis has some thought-provoking takeaways, but unsurprisingly: “Our findings suggest that many innovative projects and experiments have and continue to take place, but grantmaking remains far below what is needed.”

— Thirty-two percent of the $1.8 billion went to industry-supporting initiatives rather than direct journalism — university programs, professional development groups, and research and technology development. Public media received 44 percent of the $1.8 billion, but it wasn’t evenly distributed across the country/stations. And national news nonprofits got 12 percent (“the leading two dozen recipients were also notable for featuring six deep-vertical news organizations that specialize in coverage of topics like the environment, and six nonprofits that have a clear ideological perspective”), while local/state news nonprofits received 5 percent of the total pool. 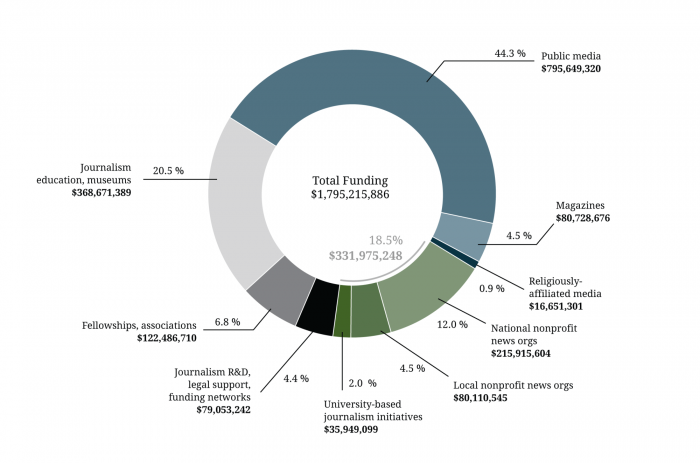 — Some of the 30 interviewees (including thought leaders, stakeholders, and nonprofit experts) expressed frustration with a “pack philanthropy” culture. The leading nonprofits like the Texas Tribune or ProPublica, they say, are able to attract a lot of foundation dollars in a competitive funding environment. They serve as an example for how others can do it, but they can also soak up some of the funding opportunities, and foundations can be risk-averse about funding early-stage ideas.

— The Freedom Forum was the top funder of “nonprofit media-related activities” in terms of amount of money granted, with nearly $175 million across 10 specific grants. The Knight Foundation provided about $133 million in 352 grants, the second highest amount given and the second highest number of grants (the Silicon Valley Community Foundationawarded 700 grants). (Disclosure: Knight is a funder of Nieman Lab.)

— Magazines like Harper’s, Education Week, and Mother Jones received 62 percent of all foundation money given to magazines ($80.7 million total). The funding was split between a third for Harper’s, a third for left- or right-leaning magazines, and the last third for education or other issue-based magazines.

— On the local level, Knight drove the highest proportion of funding dollars (20 percent, or $16 million) through 56 grants. The highest recipients across all foundations were the Texas Tribune, the Institute for Nonprofit News (a consortium of 150+ smaller nonprofit newsrooms), Bay Citizen (which has since merged with the Center for Investigative Reporting), Chicago Reporter/Catalyst Chicago, and MinnPost. The researchers’ breakdown:

You can read the full report, with its detailed analysis and more meaty charts, here.